Blog - Latest News
You are here: Home1 / Resources2 / Other3 / “Second-hand child for sell, rather good condition”

“Dominic would like a family who would support him. He would love to cook for his new family, and he would like to be the youngest or only child. And here is Sabey. Sabey would like to be adopted by a traditional family, with two parents and other kids”. These product-like descriptions are spelled out by a middle-aged woman, standing at the back of a long catwalk. She holds a microphone in her hands and smiles at the audience. Her aim today is to manage to sell at least one child.

Meet the Kids is a United-States adoption agency. A “re-homing” agency. The word re-homing is traditionally used when pets’ owners cannot or do not want to keep their cat or dog and decide to find a new home for them. In cases like those of Dominic and Sabey, children are the “family members” being re-homed. Indeed, most of these young people have already been adopted and abandoned several times. They were “returned” to the agency, most of the time without any explanation. There, they parade in front of a crowd of parents seeking to adopt. The adults can pick up the boy or girl they like the most. Children are gauged by appearance. If lucky, they will get a chance to talk for a few minutes with one of the couples. Then, the procedure is a formality. In the United States, it takes three days of training for parents to adopt and a quick appointment with an attorney to get rid of an adopted child.

This ultraliberal “adoption market” comes with consequences: one in four adoptions is canceled in the United States. Every year, 25.000 children are sent back to social services or re-homed. The procedure seems perfectly legal: these children can be endlessly re-homed until they turn 18. Like Meets the Kids, several agencies have specialized in this field. They use speed-dating methods, parades, catalogues or online advertisements. For “second-hand” children to be more attractive, adoption agencies decrease the fees.

Even more worrisome, a parallel trade developed using social networks or underground websites for parents to directly sell the child they regret adopting to another family online. For instance, 12 years-old Mike was sold for $200 online. He had stayed in his adoptive family for four years, along with his sister. Eventually, the family decided to “privately re-home” him, therefore separating the siblings. In most cases, adopting a child online is for free. Sometimes, it even is a way to claim a tax deduction and draw government benefits. Offers include pictures of very young children (most of them aged from 6 to 14) smiling. They come with captions such as “this handsome boy, Rick, was placed from India a year ago and is obedient and eager to please” or “I am totally ashamed to say it but we do truly hate this boy!”. On one of these pages, a couple gave up a 4-years-old boy they adopted because “his feet were too big and his ears looked funny”. Reuteurs conducted an in-depth analysis of these message boards and noticed that, on average, a child is advertised there once a week. The youngest to be “re-homed” online was 10 months old.

Sadly, these “disposable” children do not only attract desperate couples but are an easy prey for sexual predators. The infamous Eason case serves as an evidence. Nicole and Calvin Eason, an Illinois couple, spent years replying to advertisements online. Every time, they were eager to take the boy or girl available for re-adoption, even though the child had often been diagnosed with behavioral problems.

Quita was one of them. The teenager, adopted from Liberia, had been a struggle for her first adoptive family. She had been diagnosed with attachment issues, depression and post-traumatic disorders. When her “parents” decided to give her away for free, Nicole Eason (also known as Big Momma) got in touch with them and assured she knew how to take care of “difficult children”. No attorneys or officials were involved in the procedure. The parents and the Easons simply signed a notarized statement declaring that the latter were Quita’s new family. Quick, easy and wonderful. Except for the fact that Nicole Eason’s biological children had been taken away years earlier, when she was described as having “severe psychiatric problems as well as violent tendencies”. In fact, a few years earlier, Nicole had taken in a 10-year-old-boy while she was living with a man who is now serving 20 years in federal prison for trading child pornography. Quita confessed that she had to join them in their bed every night. According to her, Nicole was naked. Promptly, the Easons stopped responding to the first family’s attempts to check on Quita. She never showed up at school. The authorities were alerted and found out information that should have prevented the Easons from taking custody of the girl if officials had been involved. After weeks, they managed to find Quita who testified that the Easons had child pornography in their house. However, neither New York State Police or Illinois authorities took legal action to prevent the Easons from taking another child, which happened soon after with little Anne Barnes.

Quita’s case is far from isolated. All sorts of abuse have been reported by child victims of this system. “Speaking publicly about her experience for the first time, one girl adopted from China and later sent to a second home said she was made to dig her own grave. Another re-homed child, a Russian girl, recounted how a boy in one house urinated on her after the two had sex; she was 13 at the time”. Re-homed children often are adopted from foreign overseas countries, and do not speak English, therefore being especially vulnerable to exploitation. No laws, in the United States, acknowledge the existence of re-homing. An agreement exists, that was passed among 50 states called the Interstate Compact on the Placement of Children. It requires that if a child is to be transferred to a new family in a different state, parents notify the authorities. However, the Compact is far from well-known and each state is let to enforce it. Additionally, sanctions are not systematically attached to potential violations. No authority is tracking what happens to a child adopted overseas when brought to America. Consequently, some countries have made adoptions by Americans difficult or have banned them (e.g. Russia, that was never satisfied with the follow-up they had on children adopted from them). This decreased the number of foreign-born children adopted into the United States, but has been a pull-factor towards underground networks.

The US government fails to protect children of adoptions from disruption. Worse: it fails to protect them from trafficking and sexual abuse. In Belgium, a child given for adoption may be adopted by a foreigner, including by Americans. Therefore, an US citizen could adopt a Belgian child, and risk exposing him/her this horrific re-homing system. 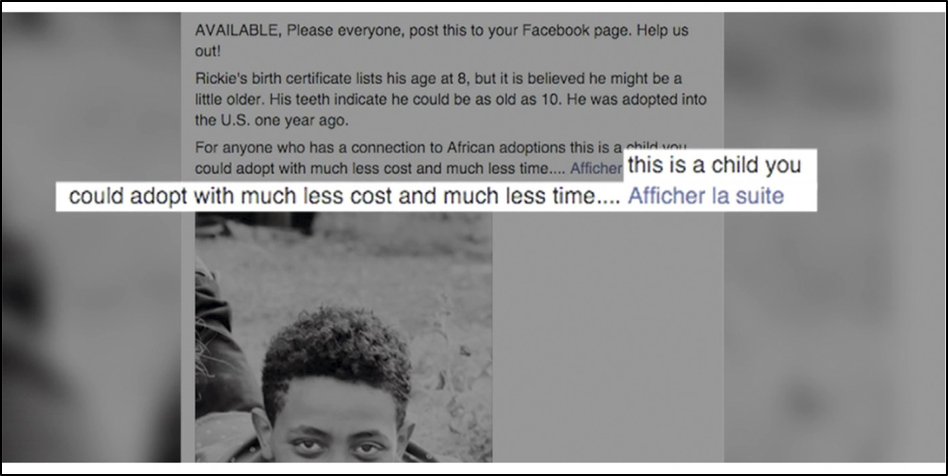